Extremadura: The Land of Romans and Conquistadors

Extremadura, land of Iberian pigs, birthplace of Conquistadors, former capital of Roman Lusitania and home to some of the best bird-watching locations in the country, is a fascinating and often overlooked region of Spain abundant in history, sunshine, wildlife and great jamón ibérico.

One of our team spent a fair amount of time in Extremadura and we fancy showing you what to do in some of the region’s main cities.

Mérida has some of the best preserved Roman ruins in Europe and was the capital of the Roman province of Lusitania. It was founded by Augustus in 25BC as a settlement for retired (emeritus) Roman soldiers and originally named Emerita Augustus. The Archaeological Ensemble of Mérida received UNESCO World Heritage Status in 1993 and is made up of a Roman theatre, a Roman amphitheatre, a Roman circus, Temple of Diana, two aqueducts, Tiberius arch, one of the world’s longest and best-preserved Roman bridges, and the Alcazaba fortress. Most of these historical sites can be found by walking along Mérida’s streets, however the Roman theatre & amphitheatre are within the same enclosure and tickets can be bought to visit both ruins. 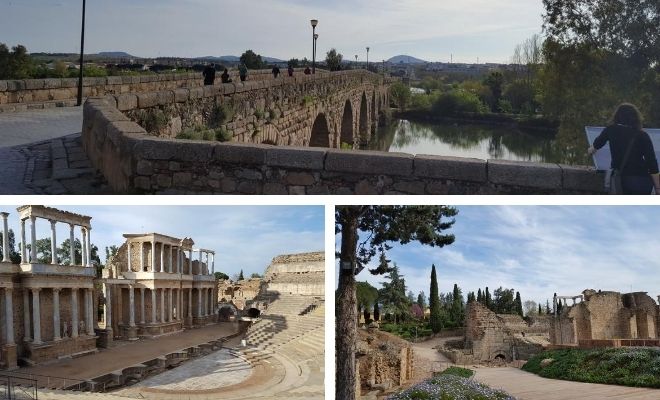 Extremadura is well known for its high temperatures in the summertime, nevertheless each summer the Mérida Theatre Festival is held at the Roman theatre and performances are scheduled at night when the air is cooler.

To learn more about the Roman ruins you can visit the fascinating National Museum of Roman Art which is home to a large range of art and artefacts discovered at the sites in Mérida, as well as more information about the history of the city.

The Parador de Mérida is about a 10 minute walk from the main Roman ruins (theatre and amphitheatre) and, despite being an 18th century convent, plays homage to the town’s Roman heritage through décor with subtle artworks throughout the Parador. The interior patio offers shade from the sun and you can cool off in the Parador’s pool and garden.

Despite being a land-locked region, Extremadura was the birthplace of an unusually high number of Spanish Conquistadors who discovered the Americas including: Hernán Cortés (conqueror of Mexico), Francisco Pizarro (who discovered Peru), and Francisco de Orellana (the first to trek the Amazon), as well as many more. Some theories suggest that these men (and some women) joined the Discoveries as a way of adventure, others theorise that, as many were second or third sons of nobility and would not inherit their family’s fortune, they saw the Discoveries as a way to make their own fortunes and avoid a life in the army or clergy.

Many of these men came from one town in particular, Trujillo. In the town’s main square you will find an imposing statue of Francisco Pizarro on horseback in front of the San Martin church, and around the town you will be able to spot the homes that the Conquistadors grew up in. The Francisco Pizarro museum occupies Pizarro’s former home, and for a very reasonable price you can learn all about this explorer’s fascinating life and Spain’s role in colonising the New World. 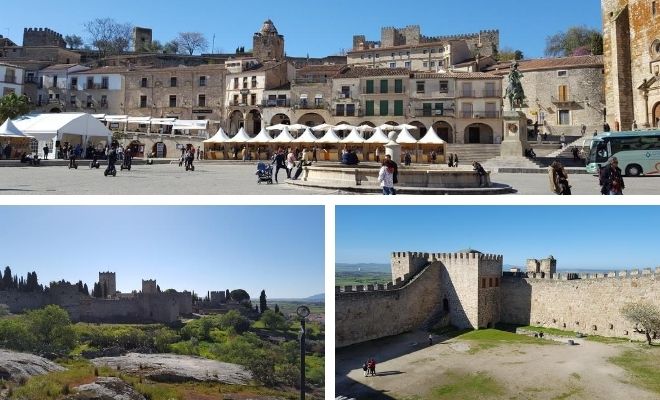 A wander through Trujillo’s medieval streets shows how very few of the edifices have changed over time with many hotels and restaurants inhabiting the ancient buildings, it is very easy to imagine medieval citizens traversing the cobbles.

Along with the impressive Plaza Mayor surrounded by fascinating buildings, cafes and restaurants, one of the main attractions is Trujillo’s castle situated at the top of the town with spectacular views across the Extremadura landscape. For any fans of the HBO show Game of Thrones, this castle was used as a filming location in Season 7 of the popular series.

The Parador de Trujillo occupies a former 16th century convent and is decorated in a contemporary style which complements the history of the building. The indoor courtyard is perfect for relaxing with a drink in the evening and in summer months you can enjoy the Parador’s outdoor swimming pool. It is only a short walk from the Parador to the town centre and Plaza Mayor.

Cáceres was the third city to receive World Heritage City status and the first in Spain, and it is very easy to see why. The city’s historic old town is an excellent example of well-preserved medieval architecture with an abundance of medieval palaces and residences; it is no surprise that the city is frequently used by filming crews across the world looking for a medieval setting. Traffic is very heavily restricted within the old town to protect the cobbled streets, which means you can meander along the medieval paths and get lost in the maze of streets knowing that very little has changed in nearly 800 years. 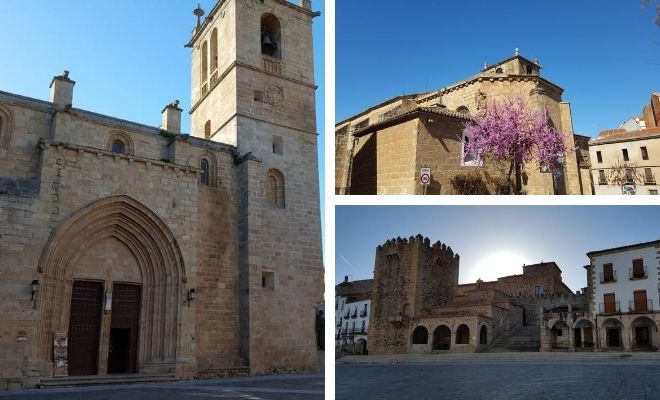 The city’s epicentre is the Plaza Mayor which was first built in 1229 and was originally used for jousting, fairs and religious ceremonies. Today it is where Cáceres’ residents come to meet for a café con leche or a tipple of an evening and enjoy the beauty of the historic churches, convents, ancient town hall and the entrance to the old town which surround the square. Cáceres is home to many churches and places of worship, most notably the church-cathedral of Santa María which was built throughout the 13th, 15th and 16th centuries and is Cáceres’ most important religious centre. Like many towns in Spain, Cáceres has been home to a number of religions throughout history, and the city’s old and new Jewish quarters are also of historical significance, you can find subtle references to their Jewish roots through plaques and pavestones across the city.

Something else to look out for in Cáceres besides the wonderful architecture are the stork’s nests. The stork is a symbol of Extremadura (particularly the nearby town of Malpartida de Cáceres) and their giant nests can be spotted throughout the region. These large structures (and occasionally the storks themselves), neatly balanced on some of Cáceres most prestigious buildings, adds an extra layer of charm to this beautiful city.

Cáceres is also one of the stops on the Via de la Plata (one of the pilgrimage routes to Santiago de Compostela) and the famous scallop shell can be found etched across some parts of the city.

The Parador de Cáceres has prime position within the walls of the old town in a 14th century palace. The décor is fresh and contemporary, yet works very well with the buildings ancient architecture and the excellent use of light makes for a bright interior. We recommend having a drink on the Parador’s terrace and enjoying the medieval surroundings.

Plasencia is situated near the bank of the Jerte River and was occupied by many years by Moorish forces until the 12th century when it was reconquered by King Alfonso VIII. It is easy to see the military advantages of this small medieval town with its well-preserved protective city wall and high position.

Since the 15th century noblemen have built palaces and manor houses in Plasencia, many of which are still standing within the old town, and you can drink in the architecture from the charming Plaza Mayor with its many bars and cafes. On Tuesdays you can head to the Plaza and enjoy the colourful market with vendors selling a variety of fresh produce and local delicacies. 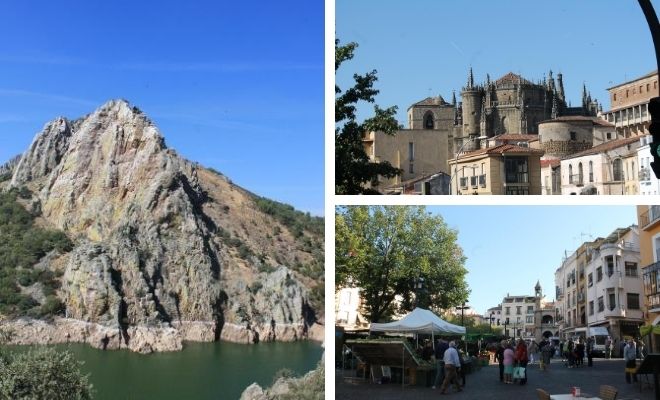 Alongside the wonderful palaces and noble houses, Plasencia is home two cathedrals, the Old Cathedral dating back to the 13th century with its Romanesque floorplan and small Gothic details, and the 16th century New Cathedral with its Gothic and Renaissance features. Indeed, in Plasencia you are sure to find find some fascinating building, square or street sign around each corner.

In addition to the medieval architecture found in the town, Plasencia is also well placed to visit some of Extremadura’s beautiful natural attractions such as the Jerte Valley with its delightful cherry blossoms (one of Spain’s main cherry growing areas) and the Monfragüe National Park which is a fantastic spot for bird watchers and home to majestic Black Vultures.

The Parador de Plasencia is situated in the old convent of Santo Domingo built between the 15th and 17th centuries. The Parador enhances the history of its building with carefully sourced furniture in the communal areas, including antique seating and tables. The Parador’s dining hall occupies the former refectory and leading from the bar to the upper floors is a fantastic solid stone staircase. Windows opening into the courtyard create a bright and airy atmosphere and the Parador’s relaxing garden and swimming pool area adds a touch of modern comfort. 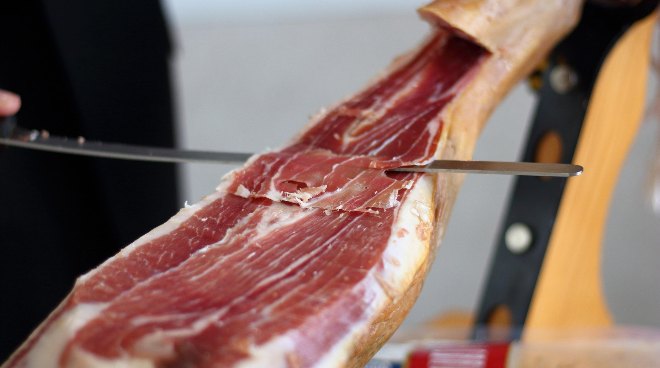 No trip to Extremadura is complete without sampling some delicious jamón ibérico. Extremadura is one of the largest producers in Spain and you can sometimes spot the famous Black Iberian Pigs out in the open as you drive by. Bellota is the finest quality of jamón ibérico, however you can find all kinds sold in most locations around the region and we definitely recommend sampling some during your visit.

How to get there?

To visit Extremadura, you can fly into either Seville or Madrid airport and hire a car to visit this lovely region. You can reach some of the cities by train; however many of the smaller towns are more easily reached by car.